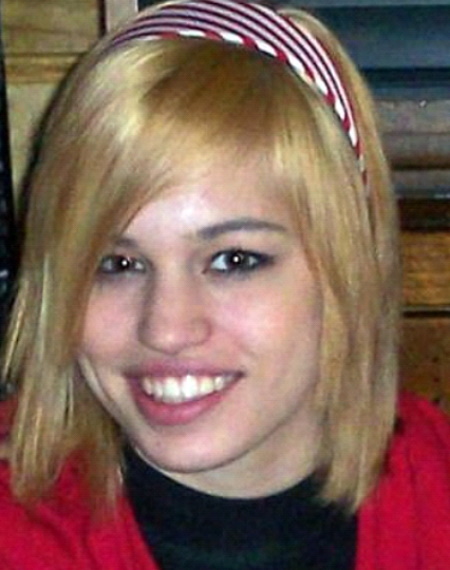 17 year old Kara Kopetsky was last seen in Belton, Missouri on May 4, 2007. She disappeared after she walked out of Belton High School, skipping third period.

Kara was in her junior year at Belton High School and worked after school as a cashier at Popeye’s Chicken in Belton.

In April 2007, Kara ended a nine-month relationship with 18 year old Kylr Yust. The two had been dating on and off since the fall of 2006.

On April 28, 2007, Kara told police that her ex-boyfriend Kylr Yust allegedly kidnapped her and forced her into his vehicle when she was leaving work that evening. He drove around before she was eventually able to escape in Grandview, Missouri.

On April 30, 2007, Kara filed for an order of protection against Yust in Cass County. She stated that he had kidnapped, restrained, and choked her in the past and she was afraid the abuse would get worse.

On the morning of May 4, 2007, Kara’s mother dropped her off at Belton High School. Her mother later returned to the school to bring her a textbook and her work uniform, dropping them off at the front desk.

Around 9:19 a.m, Kara was captured by security video walking down the hall of the school, likely to skip third period, which she did quite often. Kara never returned to school or home, and has not been heard from since.

That evening Kara’s mother filed a missing persons report to the Belton Police Department when she failed to return home after school.

Kara left behind all her personal belongings at her house, including an entire carton of cigarettes minus one pack and an iPod she had just gotten for Christmas.

Her debit card was found in her school locker, and there has been no activity on her bank account since her disappearance. Her cell phone and purse were missing.

18 year old Kylr Yust had recently broken up with Kara Kopetsky and she had filed an order of protection against him, four days before she went missing.

On May 6, 2007, Yust told police that he didn’t have any contact with Kara on the day of her disappearance. He said he had a missed call from Kara around 11 a.m that morning, but she didn’t answer when he tried to return the call.

However, phone records revealed that Kara made a phone call to him at 9:13 a.m, and he called her back at 9:20 a.m, just one minute after she was last seen leaving high school on surveillance video.

Yust denied involvement in her disappearance, and subsequently refused to answer any questions about the discrepancy in the information he had given. He passed a lie detector test and had an alibi for the morning she went missing.

On November 22, 2013, Yust was convicted for an unrelated drug trafficking charge and sentenced to four years in federal prison outside of Oklahoma City.

Between 2010 and 2016, several witnesses, including a former roommate, ex-girlfriend, and cell inmate told police that Yust admitted to strangling Kara to death and hiding her body in an undisclosed wooded area.

On September 8, 2016, 21 year old Jessica Runions disappeared after leaving a party at a home in Grandview, Missouri at approximately 11:00 pm. She was last seen accompanied by Kylr Yust, who was a childhood friend of her boyfriend.

According to witnesses, Yust, who had been released from prison two days prior, was drinking heavily at the party and he and Reunions were seen arguing.

On September 10, 2016, Runions’ vehicle, a black 2012 Chevrolet Equinox, was found abandoned and burned in a wooded area of 95th Street and Blue River Road in south Kansas City, Missouri.

On September 11, 2016, Yust was arrested and charged with knowingly burning Jessica Runions’ vehicle. He pleaded not guilty and awaited trial in Jackson County Jail.

On April 3, 2017, human remains were discovered by a mushroom hunter in the area of 233rd Street and Y Highway in Belton, Missouri.

On April 4, 2017, police conducted an extensive search of the wooded area and recovered a second set of remains that appeared to be much older.

On April 5, 2017, the first set of remains were identified as Jessica Runions by the Kansas City Medical Examiner’s Office and Kansas City Crime Lab.

On August 16, 2017, the second set of remains were identified as Kara Kopetsky at the FBI Crime Laboratory in Quantico, Virginia.

Kylr Yust charged with murder in deaths of Kopetsky and Runions

On October 6, 2017, Kylr Yust was charged with two counts of first degree murder and two counts of abandoning a corpse related to the disappearance and murder of Kara Kopetsky in 2007 and Jessica Runions in 2016.

On June 7, 2021, Kylr Yust was sentenced to 45 years in prison after the judge accepted the jury’s recommended maximum sentence in his murder trial. His 15 year sentence for Kara Kopetsky’s death and life imprisonment for Jessica Runions’ will be served consecutively.