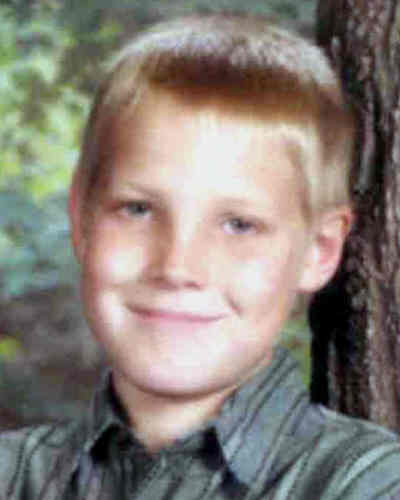 8 year old Zachary Bernhardt was last seen on September 11, 2000 in Clearwater, Florida. He disappeared from his apartment in the early morning hours, and hasn’t been seen since.

Zachary was living with his mother, Leah Hackett, on the 2600 block of Drew Street in Clearwater, Florida at the time he went missing. His mother told authorities that she left their apartment at approximately 3 am on the morning of September 11 to go for a swim and walk. She stated that Zachary was asleep when she left.

When she returned home around 4:00 am she says that Zachary was gone and reported him missing. He hasn’t been heard from since.

An extensive search of the area produced no clues as to Zachary’s whereabouts. Some investigators believe that Leah Hackett knows more about the disappearance than she has disclosed. She claims she’s innocent in her son’s disappearance, and has since moved out of state. Zachary’s father was never involved in his life and has not been called a suspect in the case.

An informant led police to a suspect named Kevin Jalbert in 2001. Jalbert had been bragging about killing a boy in Clearwater and getting away with it. Jalbert led an undercover officer to Zachary’s apartment complex, stating that he had kidnapped a boy from there. But police say he pointed to the wrong apartment and described Zachary’s clothes incorrectly. While under surveillance Jalbert also solicited an undercover officer for help with a child abduction, rape and murder.

When questioned by police Jalbert denied abducting Zachary. Police did find a receipt indicating that Jalbert went to a landfill two weeks after Zachary’s disappearance. After an exhaustive search investigators could find no trace of Zachary at the landfill. DNA samples from Jalbert don’t match any of the evidence from Zachary’s case.

Investigator’s couldn’t conclusively link Jalbert to Zachary’s case, but they did find child pornography on his computer. He was charged and sentenced to 40 years in prison.

Zachary was 8 years old when he went missing on September 11, 2000. Zachary has blonde hair and blue eyes, and at the time of his disappearance he stood 4’6 and weighed approximately 60 pounds. He was wearing boxer shorts and has scars under his chin, on the bridge of his nose and on the right side of his upper lip.

If you have any information regarding Zachary Bernhardt’s disappearance please contact the Clearwater Police Department. You can remain anonymous by texting your tip to 847411 (TIP411).

He’s been missing since 2000, making him the longest-running Amber Alert in the state – WTSP 02/20
Zachary Bernhardt Case to be on Missing Persons Show – The Ledger (05/17)
What Happened to Zachary Bernhardt? – Patch (09/15)