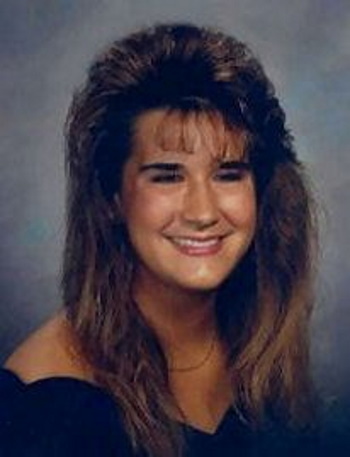 27 year old Tina McQuaig was last seen in Jacksonville, Florida on March 15, 2000. She disappeared after leaving her pharmacy job at Shands Jacksonville hospital.

Tina Marie McQuaig was born on May 5, 1972, in El Paso, Texas, to parents Linda and Elmer John Rice.

In June 1990, McQuaig graduated from Englewood High School. She married her high school sweetheart, William Ottis McQuaig, in November 1994, and they had a son together in May 1995.

At the time of her disappearance, McQuaig was in the midst of studying for an additional certification for her job as a pharmacy technician. The family lived in their manufactured home outside Baldwin, Florida.

On the morning of March 15, 2000, McQuaig dropped her son off with their babysitter, her sister-in-law who lived next door, around 7:00 am. She drove to work in a separate car from her husband.

McQuaig arrived at Shands Jacksonville Hospital for in Jacksonville, Florida, where she was employed as a pharmacy technician. She started her shift at 8:28 am, and was said to be upbeat and happy throughout the day by her coworkers.

By the late afternoon, McQuaig finished her shift and left the hospital at 4:49 pm. She was captured on surveillance video getting off an elevator in the hospital’s parking garage and walking towards her car.

Shortly afterward, she left the parking garage in her 1992 blue Nissan Sentra. Tina Marie McQuaig never returned home and has not been heard from since.

That evening her husband filed a missing persons report to the Jacksonville Sheriff’s Office when she failed to return home by 6:00 pm.

On March 19, 2000, her vehicle, a 1992 Nissan Sentra, was found in the far west corner of a Wal-Mart parking lot at 6830 Normandy Boulevard, in Jacksonville, Florida. The store on Normandy Boulevard isn’t one where the family normally shopped.

McQuaig’s car was unlocked, but her keys and purse were missing. Upon processing the car, authorities found some unidentified fingerprints and fibers, but no other clues were left behind.

On December 26, 2002, human remains were discovered in a wooded area by a surveying crew near the Cecil Commerce Center in Jacksonville, Florida.

On March 10, 2003, the body was positively identified as Tina Marie McQuaig by the University of Florida’s anthropology department. Her death was ruled a homicide by violence by the Duval County Medical Examiner’s Office.

Throughout the years police have followed several leads regarding Tina McQuaig’s murder, but no arrests have been made. Her case remains unsolved.

A $5,000 reward is being offered by the crime victims’ group, Justice Coalition, for anyone with information that may result in an arrest in the homicide case of Tina Marie McQuaig.