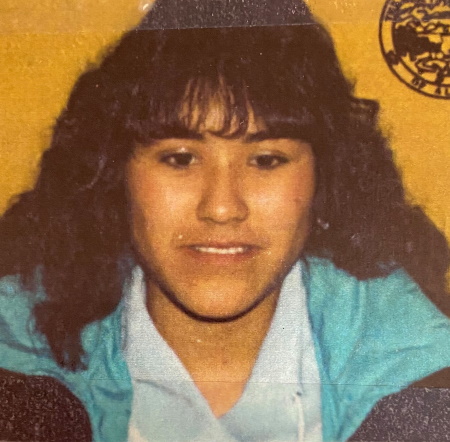 17 year old Tina Mary Young was last seen in Grayling, Alaska on December 23, 1989. She disappeared while traveling to Anvik, along with 19 year old Robert Kruger.

Tina was last seen in Grayling, Alaska, on December 23, 1989. She disappeared while traveling south to Anvik on a snow machine with 19 year old Robert Kruger. Neither Tina nor Robert have been seen since.

Tracks from their snow machine were located, ending at open water on the Yukon River, 5 miles below Grayling. The machine was located by searchers in 30 feet of water.

Personal possessions of theirs were also recovered, but neither Tina nor Robert have been found.

American Indian female with black hair and brown eyes. She is 5’4 and weighs 160 pounds. Tina was 17 years old when she went missing in December of 1989.

She was last seen wearing a a blue denim coat with a hood, black snow pants, and blue boots.

If you have any information regarding the disappearance of Tina Mary Young and Robert Kruger please contact the Alaska Department of Public Safety at 907-269-5511.