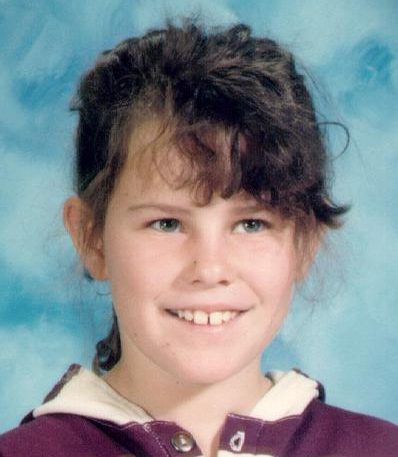 9 year old Stephanie Crane was last seen in Challis, Idaho on October 11, 1993. She disappeared after departing from the Challis Bowling Alley in Challis, where she was bowling with friends.

At 6:00 pm that evening, Stephanie was last seen walking on Highway 93 towards Challis High School located across the street from the bowling alley. She has never been heard from again.

Stephanie Crane was born on September 28, 1984 to Sandi and Ben Crane. The eldest of four children, Stephanie had three younger sisters and lived with her family in the town of Challis, Idaho.

Stephanie’s mother stayed at home, and her father worked in the mineral mines. Stephanie was especially close to her father, and enjoyed hunting, fishing, hiking and rock picking with him. Described as a tomboy, she was said to spend a lot of her time outdoors, biking around and was also part of the youth bowling league.

On October 11, 1993, Stephanie’s mother dropped her off after school at the Challis Bowling Alley in Challis, Idaho. She went to bowling practice with her classmates for their elementary school bowling league.

At approximately 4:45 pm, the group wrapped up and began to head home. A mother of one of Stephanie’s friends, who was present at the bowling alley that day, claims to have seen Stephanie walking away from the building, presumably toward her grandparents’ house.

Another mother of the group claimed to have offered her a ride home, but said Stephanie declined and mentioned forgetting her book bag at the high school soccer field. Stephanie was last seen walking on Highway 93 towards Challis High School at approximately 6:00 p.m, situated across the street from the bowling alley.

At 8:15 pm, Stephanie’s mother, Sandi Crane, went to the Custer County Sheriff’s Office to report her daughter missing when she never returned home.

Upon learning of Stephanie’s disappearance, an extensive search was immediately conducted by the Search and Rescue team of the Custer County Sheriff’s Office and the Challis Volunteer Fire Department, covering 7,000 square miles in two counties.

The search conveyed from 9:00 pm until 12:30 am produced no signs of her whereabouts and was scheduled to start again at 7:00 am. Despite searches by volunteers, police, federal investigators, tracking dogs, and boat crews, no trace of Stephanie was ever found.

An unknown yellow pickup truck, described as having red pinstripes, was seen parked at the high school around the time she vanished. However, the truck was already gone by the time authorities went to look for it, and its license plate and model has not been positively identified.

Authorities interviewed the group of children who had been at the bowling alley with Stephanie. Some claimed that Stephanie might have gone to the high school to watch a soccer practice, while others mentioned seeing a suspicious man watching them. A sketch was made and pictured a mid thirty years old Caucasian male, 5’10 tall and 175 pounds, but no new tips ensued.

In the spring of 2000, an inmate in Napa, Idaho claimed his female friend had rented a room in a drifter’s apartment back in 1993, where screams and cries of a young girl were heard coming from the basement. The drifter never allowed anyone to enter his basement and said that he was punishing his runaway daughter when the inmate’s female friend asked about it. She later left out of fear when she found female underwear in the drifter’s room.

After discovering a history of sexual abuse in his criminal record, authorities bought the drifter in and questioned him with a polygraph test, which he failed. A search of his old apartment was carried out, with blood samples and hair fibers found. Although the bloodstains couldn’t be conclusively identified as human or animal, the fibers were identified as human. However, DNA testing couldn’t be conducted on the fiber given the lack of a follicle.

A female worker, who had been at the bowling alley on the night of Stephanie Crane’s disappearance, reluctantly recognized the drifter’s face from a photo lineup but wasn’t able to make a positive identification. Due to a lack of actual evidence, the drifter’s name and face has never been made public and no arrest has been made.

Keith Glenn Hescock has been investigated as another possible suspect in Stephanie’s disappearance.

On June 5, 2002, Hescock abducted a 14 year old girl from outside her home. While he was at work, the girl managed to escape the room where he locked her and informed the authorities.

Hescock fled the scene in his vehicle when the police attempted to arrest him. The chase ended on a dead-end road, in the Bug Hole Mountains, where he shot a police dog and an officer before turning the gun on himself and taking his own life.

According to Hescock’s neighbor, Hescock was hunting in Challis on the weekend of Stephanie’s disappearance. In 1993, Hescock shot and killed a bighorn sheep ram in the area of Challis and this was documented at a game check station.

He also drove a yellow pickup truck similar to the one seen in the area connected to Stephanie’s case. The truck was never found and a search of Hescock’s residence didn’t turn up any evidence. His only criminal record in Idaho had been for poaching, but he had felony convictions in other states.

Authorities have not been able to establish any actual evidence that links him to Stephanie Crane’s disappearance. He was never questioned about the cases since he took his own life.

Foul play is strongly suspected in Stephanie Crane’s disappearance, and authorities believe she was taken against her will by a stranger.

Stephanie Crane’s three younger sisters and relatives continue to search for her, and a $50,000 reward is being offered by the FBI to anyone who provides information leading to the arrest and conviction for the person(s) responsible for Stephanie’s disappearance.

Stephanie has a cowlick on the right section of her hairline and a scar near her right eye.

Her face is freckled and she has a gap between her two upper front teeth.

If you have any information regarding the disappearance of Stephanie Crane please contact the Custer County Sheriff’s Office (208) 879-2232 or call the WE HELP THE MISSING -TIP LINE (866) 660-4025.