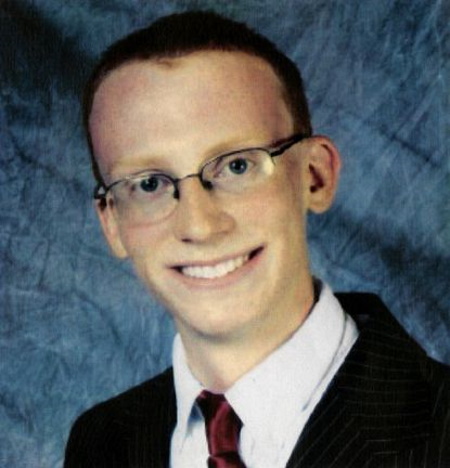 19-year-old Jesse Warren Ross was last seen in Chicago, Illinois on October 21, 2006. He was attending a mock United Nations convention at the Sheraton Towers hotel, located in the 300 block of east North Water Street, and disappeared after leaving a meeting at approximately 2:30 am.

Ross never made it back to his hotel room in the morning, and hasn’t been seen or heard from since.

Jesse Ross was born on February 18, 1987 in Kansas City, Kansas to parents Don and Donna Ross. He has an older brother and the family lives in the suburb of Kansas City.

Jesse was a sophomore at University of Missouri–Kansas City, majoring in Communications, with a minor in Politics. He was a member of the Spirit Committee, and helped organize various activities on campus

Prior to his disappearance, Ross started an internship at 95.7 the Vibe, a local Kansas City radio station. He was part of the morning show ‘Shorty and the Boys’ where he was nicknamed Opie Cunningham.

On November 18, 2006, Jesse traveled with a group of 13 other students to Chicago, Illinois, to participate in a four day college mock United Nations convention. They stayed at the Sheraton Four Points hotel, and the UN convention was organized at the Sheraton Towers Hotel, located in the 300 block of east North Water Street.

On the last night of the conference, on November 21, 2006, Jesse attended a dance hosted by conference organizers and a party, in a room where alcohol was served, at the Sheraton Tower Hotel. Shortly before 12:30 a.m, he later joined a late-night emergency meeting with the mock UN’s Security Council.

In the predawn hours, Ross was seen by a surveillance camera in the hotel lobby at about 2:30 am. None of the hotel surveillance footage captured Jesse leaving the hotel, but a staff door on the south side that was out of range of cameras could be used by conference-goers.

He didn’t appear to be intoxicated at the time and was presumably believed to be headed toward the hotel where he was staying, about a half-mile away northwest of the Sheraton Towers. The well-lit short route between both hotels covered by surveillance cameras failed to record Jesse walking to his hotel.

He never made it to his hotel, and has not been seen nor heard from again.

Later in the morning, his professor grew concerned when Jesse was nowhere to be found at the hotel. He went to check with the conference organizers, students and hotel securities. When they couldn’t find him, he contacted Jesse’s father and filed a missing person report to the nearest police station at 4:00 pm.

Investigators initially speculated that Jesse, who had been reportedly drinking, might have fallen into the Chicago River which runs next to the hotel. The Chicago River was in the opposite direction of the hotel where he was staying, so that would explain why surveillance cameras failed to record Jesse walking to his hotel.

Authorities conducted an extensive search in both hotels and its neighborhood, collected videos, interviewed the hotel staff and sent multiple divers in the Chicago River, but none brought up any clues. The pedestrian esplanade along the river also had a four-foot tall iron security barrier.

Ralph Parker, a friend of Jesse who was present at the meeting was interviewed by the police. He confirmed Jesse had been drinking but did not appear intoxicated and left at 2:00 am, stating he needed a break.

Parker, who was also Jesse’s roommate at the event, returned to their hotel room around 6:00 am. He thought Jesse was sleeping on his bed as the room was dark and there were clothes and other items piled on the bed.

In the aftermath of his disappearance, several tips and purported sightings have been reported, but no substantial clues or leads have been found.

Police found no evidence, means or motive for foul play in Jesse’s disappearance. He had no personal problems at the time he went missing, had no prior history of running away, and there were also no problems at home at the time.

Caucasian male, date of birth 02/18/1987. Jesse has red hair and blue eyes, and wears eyeglasses with dark-colored wire frames. He has a freckled complexion.

He is 5’10 tall and weighs 140 pounds. He was last seen wearing a white t-shirt, a green jacket, blue jeans and a pair of black sneakers.

If you have any information regarding the disappearance of Jesse Ross please contact the Chicago Police Department (312) 744-8266 or call the National Center for Missing and Exploited Children (800) 843-5678.