10 year old Andy Puglisi was last seen in Lawrence, Massachusetts on August 21, 1976. He went missing from the Higgins Memorial Swimming Pool, located across the street from his apartment. Andy hasn’t been seen or heard from since.

Angelo Puglisi was born on September 2, 1965 to parents Faith and Angelo Puglisi. He is the oldest of five children and goes by the nickname Andy.

Andy’s parents divorced in 1975, and his father moved to New Hampshire.

At the time of his disappearance his family has just moved into the Stadium Housing Project in Lawrence, Massachusetts.

On the afternoon of August 21, 1976, Andy went to the Higgins Memorial Swimming Pool with his siblings and friends.

The public pool was a popular spot for kids to hang out, and was located just across the street from the Stadium Housing project where he lived.

At 2:00 pm Andy’s friend Melanie Perkins left the pool, and was walked home by her 11 year old brother. Andy wasn’t ready to leave, so he stayed behind.

At 3:30 pm Andy called home and spoke to one of his brothers, and didn’t indicate that anything was wrong or unusual.

The last confirmed sighting of Andy was at 5:45, when a lifeguard saw him walking around the pool area.

Andy never returned home that evening, and hasn’t been seen or heard from since.

Initially investigators thought Andy may have ran away due to his parent’s divorce, and speculated that he may have felt torn between them.

Authorities, including National Guard Troops and Green Berets, began searching the neighborhood for any sign of Andy the day after he went missing.

Search dogs were brought in to search the areas around the pool, and scuba divers sragged the nearby nearby Shawsheen River.

After six days the official search was called off.

In 1999, Melanie Perkins returned to Lawrence and met with two locals who described finding a hole dug in the ground in the woods near the pool a year or two after Andy disappeared.

They said when they returned the next day the hole had been filled back in.

Police have returned to those woods a few times over the years, with search teams and dogs trained to sniff out human remains, but no clues as to Andy’s whereabouts have been found.

Charles Pierce was a resident of Haverhill, Massachusetts at the time Andy went missing.

He confessed to two abductions in the 1970s, including a girl who disappeared from Connecticut in 1973, and a boy from Lawrence, Massachusetts.

He claims he sexually assaulted the boy before burying him in a grave near the girl, though neither body has ever been found.

According to news reports, Pierce had a habit of confessing to crimes then recanting.

Pierce was a suspect in more than a dozen children’s disappearances in the New England area through the 1950’s to 1970’s.

He was convicted in the 1969 murder of 13 year old Michelle Wilson from Boxford, and was serving a 20 year prison sentence when he died in 1999.

Chapman’s van matched the description of the van one of Andy’s friends saw near the pool where he was last seen.

Chapman confessed to raping two boys in Lawrence after luring them away from the pool where Andy was last seen.

He was convicted of sexually assaulting six boys in the Lawrence area during the 1970’s.

He was released from prison in 2018 after a psychological evaluation found he was no longer a threat. He died in October 2021 at age 73.

Despite being a prime suspect in Andy’s disappearance, Chapman was never charged in connection to his case.

The location of Andy Puglisi, and the circumstances regarding his disappearance, remain unknown.

Foul play is strongly suspected in Andy’s disappearance, though no one has ever been charged in connection to his case.

In 2007, the documentary Have You Seen Andy? was released by Andy’s childhood friend Melanie Perkins, and went on to win the Emmy for Best Investigative Journalism in 2008. 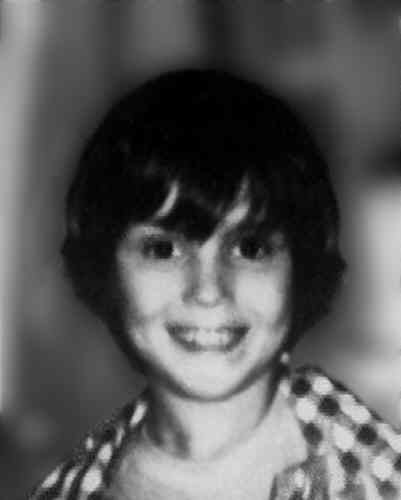 Caucasian male born on September 2, 1965 with brown hair and brown eyes. Andy stood 4’0 and weighed 65 pounds at the time he went missing.

He was last seen wearing a bathing suit, towel, and sneakers.

Andy has three scars along his spine and a skin discoloration on his chest, and suffers from mild epilepsy.